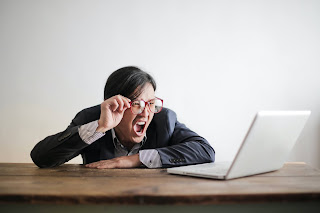 Photo by Andrea Piacquadio from Pexels

Yep, Windows 11 is brand new, so I expected problems. I didn't expect to see an error from Windows 10 in 2011 and 2013.
Windows Forums
I just searched and the link I found above was from 2012, above, with a good explanation of why it happened. I just had one subdirectory. In that subdirectory were the files that should have been in the first iteration. Previous times I searched, I got forum entries about it from the dates I mentioned.
I saw one solution that called for renaming the offender and deleting it. When I tried that, I got a 3rd iteration that was just a link. In that link file were all the directories that should have lived in the 1st one. So I un-renamed them and did a system refresh.
The refresh didn't work, so I reinstalled keeping my files.
This worked, but I am having to reinstall all my software and apps that were on my C:/ drive. You can bet I won't be putting Poser or VUE on that C: drive!!
I have also formed some opinions on my spanking new Windows 11.
Pros:
I like the new look
It was very easy to figure out where things were
Cons:
Less button space on the bar for the programs I actually use
Buttons I cannot remove and want to: Widgets and Chat
Cannot remove Windows Edge
Search defaults to Windows Edge no matter how I wail and complain that search won't use my default Google Chrome
Cannot easily change groups of extensions to certain programs
Windows Explorer still loses focus on the folder I'm working on
Windows Explorer still scrolls up or opens folders when trying to move files
Quick Access still adds files that I don't want pinned, and some can't be removed, even after unpinning
Overall, I like Windows 11 better than Windows 10, mainly because I'm not constantly brushing the stupid window with news and opening it accidentally! The widgets window behaves better, though I couldn't find any 3rd party apps to put there. Where is Google when you need it?? I would love to put my Google News there instead of Microsoft's pitiful excuse for a news server. At least Google has a vague idea of what I'd like to see there, and more ways to tell it what I want.
I already knew I was in for days of installing software and yes, dealing with passwords. I feel like that fella in the picture. But now I'm worried that I will do all these reinstalls and possibly have to go through it again. I'm going right now to set a restore point!
Posted by dannistories at 10:53 PM