Peril in a Cessna 150 Over Atlanta 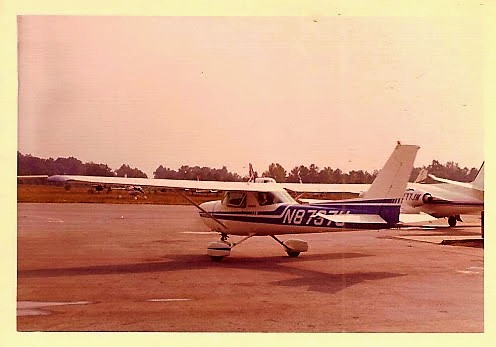 My father had a private pilot's license. I hoped when he got it that we would fly a lot, but I only got to ride with him once in a blue moon. He didn't have his own plane so he would rent one occasionally.

He decided to take me to visit my sister. This was about an hour's flight from PDK [Peachtree-DeKalb Airport] in Chamblee, GA. This city is a suburb in NE Metro Atlanta. The year was 1984. Dad rented a Cessna 150, which was a two-seater plane. It was a rainy afternoon.

We had a lovely visit, but we left late. Dad did not have an IFR rating. He was not supposed to fly at night [on instruments]. Dad was tense because we left at sunset. Also, the speaker on the radio was bad and he could barely understand the traffic controller at PDK on the way up. He did not have headphones. I wasn't very good at helping understand what was said, of course, because I never studied flying. I was 26. 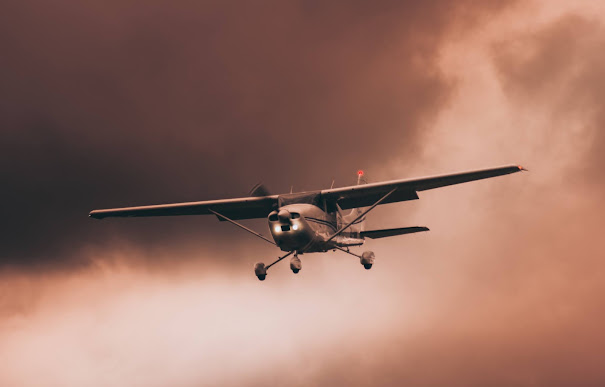 Photo by Jarod Barton from Pexels

About time we got to the Atlanta metro area, it got dark. Dad thought he spotted PDK and headed for it. But, it wasn't. He kept trying the radio and getting static. Both of us were tense. Dad kept making small talk, but he knew, and I knew, we could easily run out of gas.

We kept flying for about an hour when he got in contact with Stone Mountain Airport, 'way on the East side of DeKalb County. Now that he had a beacon, he was able to figure out where to go to get northeast. We had a rainy day of travel, and lightning occasionally lit up the sky.

I could tell Dad was looking for streets that might be suitable for an emergency landing. I was, too. But he was talking about anything other than the possibility of running out of gas. The trip to PDK was a jumble of lights and I couldn't find a single landmark. Dad had been on many flights over Atlanta, of course, so I'm sure he found some landmarks. Tension and silences grew except for the constant squawk of the static-y radio. And thunder that came more frequently. Rain on the windshield made it difficult to see. At times, the rhythm of the engine was off. Dad was an airplane mechanic during World War II and taught me how to listen for obvious problems with my car engine. I didn't know much, but the skips in the engine worried me. What else was wrong with this rental plane?

Finally, he was close enough to know we were in radio range of PDK. We both struggled to understand what the air traffic controller was telling us. PDK was a busy little airport during the day and seemed just as busy after dark. Lots of radio talk and lights circling in the sky. Sometimes Dad would ask me, "What?" after they said something and maybe I caught a word that he didn't. Weather cut our visibility more and more as we went. I was aware of my heart pounding.

As we got closer to the airport and got into the landing pattern, Dad was very busy watching gauges and flying lights. Tensions had been high and now it was worse. Traffic control gave Dad instructions and he kept having to ask them to repeat. We weren't the only small plane landing. I prayed silently with eyes open, watching the darkness all around us. Finally, Dad understood which runway to head for, I think it was 27. He asked me to look for it then found it. I found the line of blue lights on either side long after he did. Thunder and lightning got worse.

We approached the runway. I thanked Heavenly Father for bringing us this far. Wheels whined as they touched down. Again. It was a good landing. We came in pretty straight. Dad taxied to the gas pumps and we were laughing and talking, now that our danger was over. Until the engine stopped. We ran out of gas right there!

The man at the pumps busily got on his ladder to reach the gas tank over us on the wing. I noticed his face as he kept checking the gas pump numbers and staring at the hose. Finally, he finished, put the cap back on and got down. Brought the ladder across and stowed it. He came up to Dad and said, "Man, you were flying on fumes!"

The man said, "I've never seen a tank that empty! I put more gas in that tank than the specs say it holds!"

Dad got quiet. I didn't say anything until the man was out of sight, Dad paid the rental in the office and reported several problems with the Cessna, and we walked out into the rain to his car.

Dad smiled, but our levity was gone. "Don't tell your stepmother what happened."

I laughed. "You know I won't!" And I didn't. We were quiet as he dropped me off.

I have thought about that night a lot. As far as I know, Dad never rented a plane again. I would have flown with him because I don't hold grudges. My dad was the kind of person to work harder after a mistake. It didn't make me scared to step into a plane or be near an airport. If Dad had needed to make an emergency landing, I still think he would've been able to do that.

That doesn't mean I wasn't scared up there, knowing we might run out of gas. I knew we might because I had asked Dad if we could fly around longer and he mentioned there wouldn't be a lot of gas in the tank when we got back to PDK ... before we got lost. I was very scared! But, neither of us gave up. We listened intently to that horrid radio. Dad kept asking for clarification until he got the instruction. It was obvious to me that he was mentally making backup plans. He was doing his best, and I was doing what little I could to support him. I didn't talk so he could concentrate. I didn't panic. I didn't get angry or show my fear. When he asked for my help, I did what he asked. When he didn't, I just watched what was going on and kept myself calm. We both knew that a lot of planes and people didn't survive an emergency landing. But, we both kept calm and just kept on believing that we would land safely. The thunderstorm really didn't make things that much worse except for extra static on the radio. Lightning wasn't striking near us.

Up there, trying to spot PDK through the rain and in that jumble of lights and trees, I was scared. But, I also trusted my dad to get us there. And, he did!

Don't panic if you're in an emergency situation. I had been through several before this incident, and I've been through several afterward. Every emergency is different. Sometimes, it's just happenstance. In this case, Dad thought he had enough time to get to PDK before dark. The malfunctioning speaker contributed to Dad's error. But what matters, is how you handle an emergency. Growing up, I watched my mother through several. She had been an emergency room nurse. Her stories of how nurses and doctors handle life crises inspired me to keep my head when emergencies did happen. I saw Mama keep hers through several. Dad didn't have many opportunities to show his courage in front of me, but that night, he sure did. 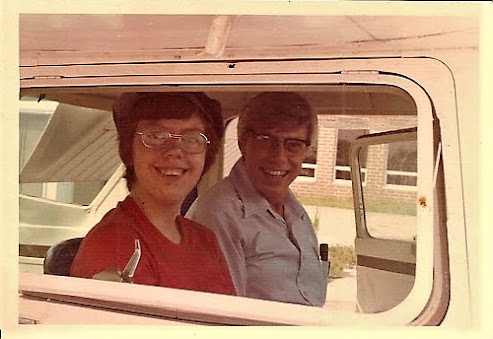 Photo copyright 1984 Susan S. Kyle. All rights reserved.
Posted by dannistories at 4:31 AM