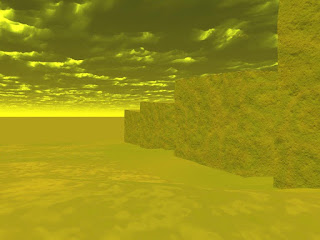 Elshar Mashai is in the 7th Galaxy [Large Magellanic Cloud]. The cubes you see are the stone houses of hundreds of thousands of provs that cover Elshar Mashai. Most Elshars are traders. Trade is measured in how many times an item traded changes hands in a local day, sunrise to sunset. A persons' trade balance at sunset determines which of these cubes, in which prov, that he lives in that night. Cube houses have one window and one doorway, and an adobe oven. This side faces The Barrens, so the openings are on the other side. Most sandstorms come from the Barrens side of each prov.
It is a colony of Elshar, where all of the Elshar people and their 10,000 colonies come from.
This render came from a file I created in Vue 2016.
By: via DanniStories Telegram Channel

Posted by dannistories at 5:48 PM